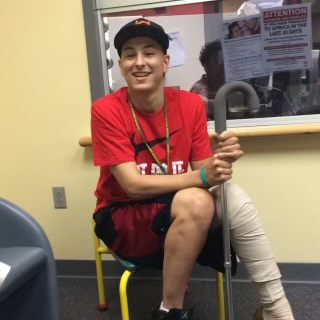 In 2014, Josh Smith was a recent Central Connecticut State University graduate looking forward to starting his career in Marketing. As a young man who held an image of the picture perfect health, Josh would be dealt one of life’s most challenges hands: cancer.

As an avid basketball player, Josh was regularly on the court playing with friends. This would be where Josh first felt something was wrong. He developed pain in his knee and would feel fatigued, even just after a few minutes of play. While everyone had originally hoped these were just the effects of arthritis, Josh’s physician performed a few scans along with a biopsy and soon after delivered the devastating diagnosis of Osteosarcoma to him and his family. Osteosarcoma is the most common type of bone cancer, often affecting children and young adult age groups.

Josh was given one of the most intense treatments in oncology. Surgeons worked to remove his entire femur and knee with a titanium rod taking their place. A vast amount of blood was needed to get Josh through the 12+ hour surgery. He then received 10 rounds of chemotherapy in the hopes of securing remission.

“I was no longer planning for the future, I was now living in 3 month intervals”

Those hopes would become reality, but after a year of remission Josh received more devastating news. His cancer was metastatic and now showed in his lungs. After all the physical pain endured, a second diagnosis served as sharp emotional pain for Josh and his family.

Instead of letting this consume him, Josh channeled his ability to stay positive. Under the toughest of circumstances, there was one word that would define the following year of his journey: INFINITE. A word that could be used in so many ways found meaning not only in Josh’s life, but his loved ones.

“Even if I wasn’t going to make it, who I was and my spirit would”

After a second year of fight, Josh, alongside his community of support, would overcome the odds yet again. Today Josh celebrates 4 years in remission and supports many community organizations in their fight against Osteosarcoma.